Note: This post was supposed to go up on Wednesday but for some reason the site was having issues and not letting me save the post or upload images.  Everything seems to be figured out now.  Sorry about the delay.

I was listening to episode 234 of the Gamerstable podcast which was about tension and mood. In the course of their discussion, they were talking about perception rolls and other knowledge type rolls and who should be rolling them and the effect that had on mood and immersion in the game.  I want to talk a little about making those kinds of rolls. 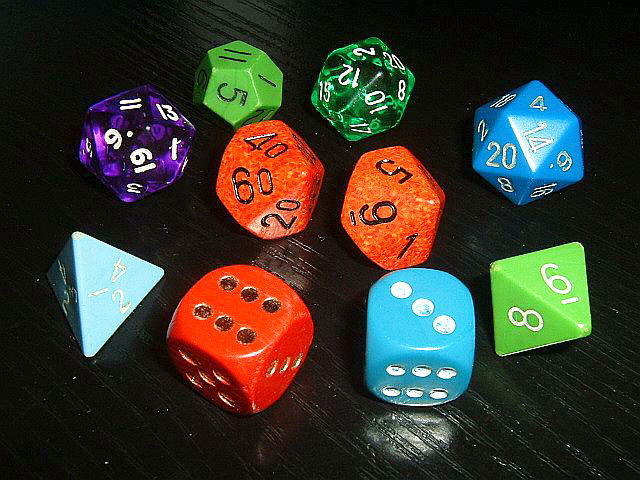 When you hear discussions on this topic, it usually falls into two different groups which can roughly be described as “Players roll” and “GMs roll” with discussions of the pros and cons of each.  There is sort of a third camp, “No roll”, but to me that falls under the GMs roll category, i.e. the GM decides what happens. To run through them quickly, as I see it, the relative merits of each option are:

I’m definitely in the “players roll” camp.  I like to roll the dice as do my players and I want to let them.   So how do I mitigate the metagaming negatives of this method?  Well, I employ a variety of techniques.

The first thing I do is call for and allow lots of checks.  Often the result is “you don’t notice anything”, usually because there isn’t anything to notice  (or in the case of knowledge based skills, “you don’t remember anything”).  Some may argue that this slows down game play especially if we’re stopping at every point along the path to make perception rolls.  However, I’ve found that it doesn’t really hinder all that much and the players learn the appropriate time to make the checks.  I’d rather have them asking for them a little too often than having to prompt them for them.

Related to this, although maybe not the often part, is that I will sometimes have rolls cover a longer period of time.  Thus they make one roll for their watch or for an hour of travel down the road.  I can then adjust the success or failure based on that roll and the difficulty of what comes up.

This option was actually mentioned in the podcast and is the one I use the most.  Here I treat success and failure more as a quality of perceived information check than strictly success/failure.  If something is happening, or is in the location, everyone is going to know, the die roll simply informs how quickly they notice, and the amount of detail initially perceived.  And for perception checks, it also may inform action bonuses or who gets to react first. i.e. those that make the check can react while the others are surprised or confused.

Successes get details.  Failures get vague generalities that may or may not be completely correct.  There is always a kernel of something in the response.  The greater the failure, the smaller the kernel.  Or maybe that I describe the general scene for everyone, failed check or not, and then pass those that succeeded (or succeeded the best) a note with more details that it is then their job to share with the rest of the party or react to.  The basic idea is that there is information to be provided, the quality depends on the skill roll.

For these types of checks, I’m pretty particular that you can’t retry.  You get one chance and have to work with what you discover (or don’t).  If circumstances change, a new roll may be warranted and I’ll allow it. But if they just keep doing the same thing, the roll stands.

Why did they fail?

The other thing I like to do, especially with knowledge type checks is narrate the reason for the failure.  Maybe they failed a lore check but are from a different country so they knowledge doesn’t apply to the local area.  Maybe they were distracted by the cat nuzzling their leg and didn’t see the bandit jump out of the alley way. Or something else.  Failure is a lot easier to take when there is a story associated with it.

The other thing I like to do is ask not only if they succeeded or failed, but by how much.  Typically everything has a modifier known only to the GM as to it’s difficulty or how it modifies the die roll.  The just because the player thinks they succeeded or failed doesn’t necessary mean they did.  This goes back to the trust issue with the GM rolling but as long as you’re consistent and honest about it, it works out.

I especially use this one for knowledge checks but also for perceptions.  This one typically comes up with games that are more skills based like RuneQuest.  Here I have the players make a roll and tell me which knowledge or lore skills they succeeded at.  And then I provide them information based on what worked and what didn’t or maybe still a “no information” result if none of their skills applied.  This kind of falls in with the something for everyone idea.  Everyone will typically succeed at something and you can point out different aspects of the scene or information to the different players depending on what they succeeded at.

No technique is perfect and even though I’m in the players roll camp, sometimes the implications of knowing the metagame aspects still warrant me as the GM making the roll and I will.  However, by employing a variety of techniques, you can minimize the metagame impact of the players knowing if they succeeded or failed and keep the game flowing and interesting.

What do you do about perception and “secret” checks in your games?  Do you like one method over the other?  Other ideas that would work?  Share your thoughts in the comments below.