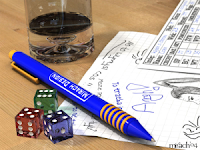 This is not a pet peeve of mine, but every time a I see a reference to table top role-playing as a ‘pen and paper game’, it makes me chuckle and I wonder if I’ve had some abnormal/alternate earth gaming experience. When I got into role-playing, everything was written in pencil. The volatile nature of character statistics made this a necessity if not a convenience. I remember when we would get a new player to the group, if they had never played before; no big deal, we would just inform them a pencil was a better idea for keeping track of characters. If the person said they had played before and used a pen, we would ride the player about not being a ‘real’ player. The game master might go out of his way to force the player to change values more often than other players. That character would be the odd man out and chosen for any ill-fated tasks until the player saw the errors of his way.

As I switched from group to group in my errant travels across the land, and yes as far away as the far east, this seemed pretty normal. I know the next question; “What about erasable pens?” My group at the time went through this phase too. I do not know which era of the erasable pen you are referring to, but when they came out… they were crap. The ink was spotty, not the smooth ball points or felt tips you have now. And they did not really erase. They partially erased and partially smeared the ink on the paper. The user generally created ‘eraser holes’ a lot faster than a pencil user.

I do not use erasable pens now, but a year or so ago, I was checking out of an office supply store that had a display at the register for an erasable pen. There was a little pad of paper and and cup of pens to try out. Since I wasn’t doing anything but waiting to pay for my purchase, I figured ‘why not?’. I must admit, they got me. The pen wrote beautifully, and erasing was easy and left no trace of the writing. I thought it was so good, I bought two on the spot. Well, I started using them and although I couldn’t bring myself to desecrate my character sheet with it, I did use it to take notes. What I came to found out, was the reason it erased so well was that the ink was heat sensitive. The friction from the eraser was enough to counter the ink and make it turn invisible. How did I learn this? Well, on one particular game day, I decided to leave my backpack in the car when I went it to work. On this particular warm summer day, the natural oven like temperature in the car was enough to make four pages of notes disappear from sight. To exemplify the cosmic “gotcha” for using a pen in gaming, both pens ‘burned’ out in the hot car and no longer wrote. I probably could have done something to get my notes back, but it wasn’t worth the effort to find out. I merely chalked up as another reason why you should not use a pen for table top RPGs.

I am curious as to how regular ‘pens’ are in other gamer’s group. Is this an erroneous term or did I just happenstance on hard core pencil users.

Categorised as: Tips and Tricks