In my post on calculating planetary orbital periods, I mentioned that I might do a post on determining the mass of the planet.  Well, here it is.  And like that process, it sounds a lot harder than it really is.  So let’s dive in.

In order to calculate the mass of your planet you again only need two things: the surface gravity and the size of the planet.  The relationship between these quantities is give by

where g is the surface gravity, G is our friend the gravitational constant (6.67384×10-11 m3 kg-1 s-2), M is the mass of the planet, and r is the radius of the planet.  The units here are SI (meters, kg, seconds).  If you want to work in multiples of Earth masses, radii, and surface gravities you can drop the constant G.

So the calculation is straight forward.  To get the mass, you just take the surface gravity, multiply it by the radius squared and divide by the gravitational constant. i.e.

And that’s all it takes. 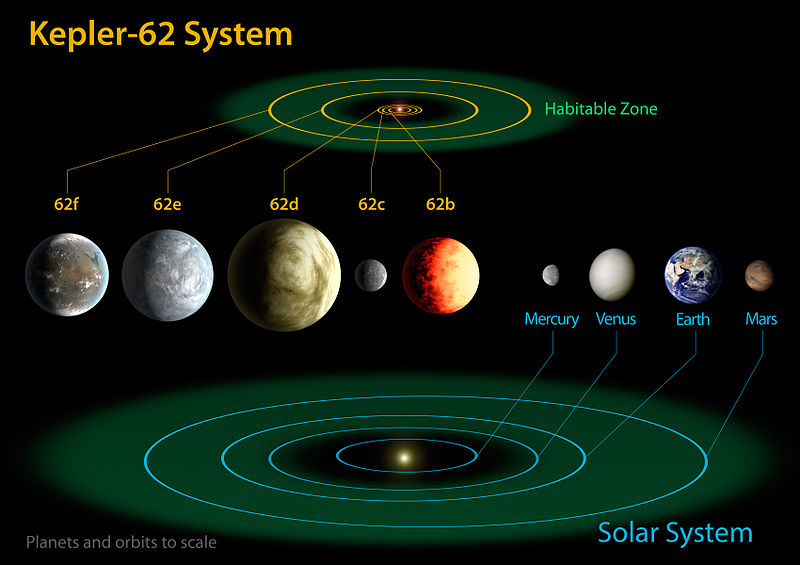 Kepler-62 System and the Solar System

Time for a Reality Check

That’s all well and good for planets we know about, but what about a random planet you’ve made up for your game (or found in a supplement).

You may not realize it yet but that’s awfully low.  At least for a terrestrial planet.  In fact, it’s a really weird density for object we know about.  Let’s look at some comparisons (remember that the density of water is 1000 kg/m3).

From this we see that the terrestrial planets have densities mostly around 5500 kg/m3, although the Moon and Mars are lighter,while the gas giant planets have densities around 1500 kg/m3, and the ice moons and planets are in the 1500 – 2000 kg/m3 range.  So our hypothetical planet doesn’t really fit any of those models.  The closest match is Europa, one of Jupiter’s moons that is mostly made of silicate rock and water ice.

So what does this mean?  Well it means that the planet we just created is probably very deficient in metals.  It is a large abundance of nickel and iron in the cores of the planets that make Mercury, Venus, and Earth so dense.  Mars and the Moon have a lower iron content and so are a lower density and the outer planets and moons are even more iron poor (relatively.  There is probably more iron in Jupiter than the entire mass of the Earth).

Could such a planet exist?  Sure.  But you might want to think about the implications.  Similarly if you found that the density of your planet is really high, you might have a problem in the other direction.  It is just something to think about when designing your world and your system.